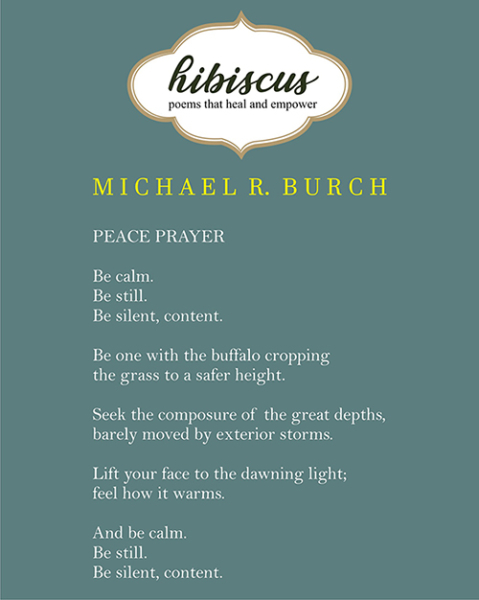 Be one with the buffalo cropping the grass to a safer height.

Seek the composure of the great depths, barely moved by exterior storms.

Lift your face to the dawning light; feel how it warms.
And be calm.
Be still.
Be silent, content.

American poet Michael R. Burch plays well with symbolism. With great humility, or perhaps to criticize the modern world for its neglect of contemporary poets, he claims to be “unknown” to the fraternity despite his over 5000 publications. His “Peace Prayer” elicits modest use of words—adequate but careful. Burch’s selection of symbols is standard but wise. In his 9-line-poem, he brings two (or more) powerful images and three (or more) logos.

In Native American culture, the buffalo is considered holy—a totem, a power animal that relates to abundance, prosperity, and provision. It also means stability and consistency. Spiritually, the grass is no different; it symbolizes community, togetherness as well as abundance.

Burch advises us to be “content,” and “one with the buffalo,” which eats “the grass to a safer height.” Here the poet does not address well-being or opulence in the worldly sense. Burch has a sacerdotal motive. He employs a totem to reach out to the sacred, as he urges us to look at the “dawning light,” primarily by disassociating ourselves from the outward chaos.

It’s naive to think of the sun always, as the source of luminescence.  Fervent meditation allows one to envision the radiance that arises from within, called Atma-Surya, an idiom found in Yoga. Atma denotes self; Surya is the sun—Atma-Surya refers to illumination that “warms” our existence on the planet. Here “warms” is a smart use that points at the reinforcement of the spirit.

Note: The title of this critique is drawn from Casey Dorman’s science fiction novel, The Peacemaker.