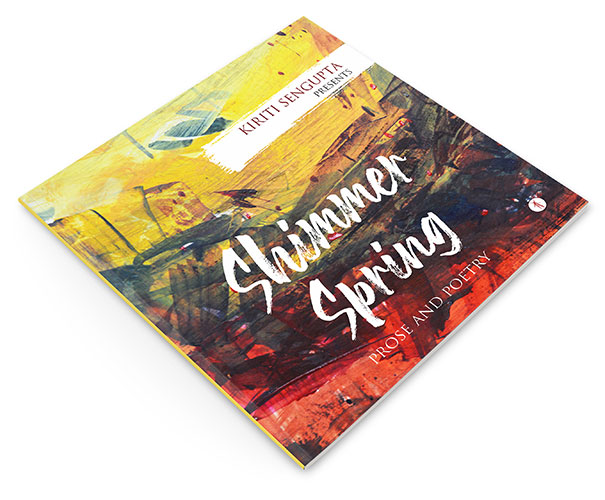 How do we perceive light? How do we intuit its source? It can be cockcrow, it can be the candle we float in the river, it can reasonably be the lantern Ma placed at my study when there was a power cut, or it can reasonably be literature that illumines our faculties. It is imperative to recognize the light that allows a respite from prevailing darkness. Respite isn’t the right word, I guess. Radiance liberates us from the murk. One must remember, it’s the shimmer that sustains lucency. Let me clarify it further: reading down Section 377 of the Indian Penal Code has brightened the LGBT rights in India. Think of Manoranjan Byapari. He upholds the subaltern voices in our country. Establishing freedom of expression helps light play in our lives in ways more than one.

“Light that emanates from the core of gloom is your glow. Goodness, wide-awake among all discord, is your truth.” — Tagore’s lyrics have been the most significant motivation as I conceived Shimmer Spring: prose and poetry. I was curious to explore how contemporary authors derive and disperse light. After all, light is a common metaphor for all that is good, illumining, enchanting, truthful, or exuberant. All in all, it’s the positivity that made Sukanta Bhattacharya note, “As long as I’m alive / I’ll clean the muck off the earth.” It’s the poet’s “pledge to the newborn” that he would “make the world liveable.”

Shimmer Spring aims at drawing our attention to life we often describe as mundane. It’s the ordinariness that shelters hope. “The mujawar forgives the invader,” who is responsible for the explosion leading to a “darkling courtyard” and “broken lamps” at the dargah. Pakistani poet and filmmaker, Ammar Aziz, takes refuge in the pious light in his startling prose poem, “The Dargah at Night.” Prof. Anannya Dasgupta depicts the “exposed brick wall / broken archway / ruined banquet hall” as properly “aligned” in her poem, “At Lucknow Residency,” as they come “alive in that moment, / wearing the roofless sky.” It is Dasgupta’s indomitable optimism that finds balance in the shattered architecture of historical relevance.

Poet and academician Akhil Katyal has magnificent ways of addressing an average “quarrel.” He succinctly puts down: “There are two kinds of light / at work always.” He evaluates the Sun’s emission as “so much” as it traverses to the Saturn. Katyal doesn’t waste time to settle for the “rainforest” that glitters as “a firefly” makes use of “his 3 mm bottom.” Hyderabad-based poet and scholar Jhilam Chhataraj brings “nimbus-myths” center stage and probes biofluorescence to conclude: “cold / luciferins illumine god’s halo.”

The author of 18 collections of poetry and professor of English/Creative Writing at Towson University Alan Britt walks along with the interface of a poem and its author whose esse is no different from that of his work. They both feel despondent until “language begins / falling like leaves / from the ceiling” of their “despair.” In “An Ode to a Poem,” Britt subtly grips light—in art, it’s essential to “recognize” the excellence regardless of any verdict or mandate. Only then can a poet or a poem keep “on dreaming / a new sensibility.” In “Disrobe,” Chennai-based poet Uma Gowrishankar finds it crucial to denude to “come under the blue sky.” She approaches “the odorous pine forest” to realize “silence // is the truth of noise.” Gowrishankar churns light from the apparent rebuttal between quietude and sound and endorses the Blakean tenet: “without contraries is no progression.”

Pigeons flocking beneath the Eiffel Tower are familiar. However, Joan Kwon Glass, who grew up in Michigan and South Korea, remembers her Paris trip back in June 2017 as it bestowed on her newer realizations. “What I remember most about Paris is that when / the birds took flight, their wings unfurling beneath / 10,000 tons of iron sounded like the collective breath / of every mother giving birth; at that moment when your child / is still yours, but not for long—not for long.” The stunning imagery of accumulated breathing backed by a heartfelt rumination: how long does a newborn belong to its mother? Sanjeev Sethi, the author of the highly commended This Summer and That Summer (Bloomsbury, 2015), posits the reader as an “intrepid devotee” who will leave no stone unturned to reach the poet’s “oeuvre.” Sethi predicates, “Gaps in a poem / are for the reader / to tenant.” The discerning poet’s exploration in “Orbicularness” culminates in a hunch: “Sometimes / one belongs without belonging.”

“Animals have been speaking to us all along,” writes Tim Kahl, who edits Clade Song and teaches at California State University, Sacramento. His dog is cued by the glowing screen of the device that has access to the internet. The unseen squirrels’ screech to draw the dog’s attention—“her tail / wags.” Kahl opines, “it’s a call to the inner / wolf to let instinct rise,” and finally, with “a puzzled look,” she appears to be “lost inside a late afternoon raga.” The state of being unseeable is temporary. Years ago, John Donne challenged Death in Holy Sonnets: “Death, be not proud, though some have called thee / Mighty and dreadful…” Kahl, too, confronts absence when he puts down, “the invisible contains many sounds, many bodies,” and names it a “vague interlude.” I can assume, Chandigarh-based Taseer Gujral is fond of petrichor as the first drop of rain hits the soil, for she loves the touch of moist soil when she gardens. In “In a City of Mirrors,” Gujral envisioned death as she walked along. She came out “unhinged as / a flood of light pierced the dark.” It was when “the whole world found / a release like a million bees / flying away from their nests.” Gujral’s surreal take on salvation is unique and deserves an extended dialogue.

Shimmer Spring bears contributions by 39 authors. I won’t share my take on all poems, which will only make this introductory note unnecessarily long. Among the contributors, four authors have written prose pieces. Be it Gayatri Majumdar’s “Dancing with Your Higher Self” or Kanchan Dhar’s “Becoming the Himalayas,” readers will find them as enticing as to exploring the horizon. Koushik Sen’s experimental prose, “Hands,” significantly unveils our introspections: “Just as confused as a baby that closes its hands in an attempt of holding onto a trust that cannot be judged by its senses, while it is still at the nipples. It is that faith that makes one demolish a place of worship? The same hands?” In “Rainbow,” Shikhandin shares a mother’s “sweet aroma of contentment” as she enters her daughter’s room: “I can see nothing in the sky. But when I look down, I see my rainbow, alright. Tomato red T-shirt and grey slacks. Hair billowing in the afternoon breeze. When she yells again, I tell her that my rainbow isn’t in the sky. When she laughs, it sounds like bells chiming to my dry ears.” The mother’s joyous expressions remain unbeaten.

Shimmer Spring: prose and poetry would not have seen the light of day had I not been complemented by Pintu Biswas, the artist, and Bitan Chakraborty, the designer and head of Hawakal Publishers. Their creative juices flow uninterruptedly across the pages. Their sensibilities have worked wonders for this anthology that is also a feast of colors, paintings, and designs—genuinely a treat for your eyes and senses as well.